Livia Hoffman is a junior at Saint Ignatius College Preparatory High School in Chicago, Illinois. She studies Homeric Greek, Classical Latin, and Egyptology and has a passion for the ancient world in general. She also volunteers at the National Hellenic Museum of Chicago. With her Classical Promise Grant, Livia plans on giving a series of thirty-minute interactive presentations, The Eureka Seminars, to elementary and middle school children over the summer. These lectures will cover topics to include: Troy and Homer [and mention of the founding legends of Rome, London, and Paris], Ptolemaic Egypt and Cleopatra, and Cuisine of the Classical World, based on the cookbook of Apicius.

*N.B. - Due to COVID-19, Livia has been unable to deliver her presentations to a live audience at the National Hellenic Museum but hopes to be able to do so by the end of the 2020-2021 school year. In the meantime, she has prepared her talks and made them available on YouTube.

Sara Wietbrock is a Latin teacher at Crown Point High School in Crown Point, Indiana. The Crown Point Latin Program plans to offer a summer enrichment program to local students in third through seventh grades. High school Latin students act as the teachers and introduce the younger students to Classical mythology, Roman culture, and conversational and Classical Latin. The program aims to expose students to Classics, to encourage connections between Latin and students' own language, and to prove to students and parents that Latin is alive and exciting!

*N.B. - Due to COVID-19, the Crown Point Latin Program's Latin Summer Camp has been postponed to Summer 2021.


Abigail Sullivan, a student of Ms. Maureen Haviland at Lexington High School, is creating a two-week summer program for middle school students in Lexington, Massachusetts. The program will be titled "Latina: Lingua Vitae" and will explore both the basic principles of the language as well as its emergence. Students will also study Greco-Roman culture and mythology. This program will be incorporated into Lexploration, a local summer day camp with one-week sessions.

Andrea Stehle is a Latin teacher at BASIS Shavano Middle School in San Antonio, Texas. For the past three years, her seventh grade students have conducted a mythology camp for younger students at their school. This year, they are conducting a monthly mythology program for elementary-school-aged children living at a long-term shelter called Magdalena House. Andrea and her students hope that bringing mythological stories and activities to the shelter will be a positive experience for the children living there.

Katie Close is a student of Mr. Eric Indgjerd at The Oaks Classical Christian Academy in Spokane, Washington. Inspired by her own "Grand Tour" to Greece and Italy this summer, Katie plans to create a Grand Tour experience for the 3rd grade beginning Latin class. She will make colorful passports for each student, also utilize maps and stamps, and then use them to "travel" through the ancient world of Chapter 1 in Hans Orberg's Classic text, "Lingua Latina". She will also use the passports and stamps to encourage speaking Latin in front of the class and in small groups. One of Katie's classes this year is "Senior Independent Study," which will give her the opportunity to student teach Latin at her school. She is excited to be a recipient of the Classical Promise Grant and hopes to get a lot out of the experience.

Sarah Shin of CHD Academy in Dublin, California, plans to establish an after-school Classics Club to supplement a Junior Classical League Club and reinforce language learning for a group of 24 middle school students. Her goal is to show students that learning Latin can be fun and engaging, by focusing on hands-on activities, games, and interactive workshops covering ancient geography, classical mythology, Roman civilization, daily life, and history, as well as Latin grammar and vocabulary. Her hope is that, as a result, the middle school students might choose to continue learning Latin at the high school level and maybe even at college.

Varsha Bansal is creating a program at Cantiague Elementary School and Jericho Middle School (Jericho, New York) in which he will spark students' excitement about Greek and Roman culture through creative workshops and games focusing on subjects such as geography, the ancient Olympics, and Roman architecture.


Julia Paloma Manso will organize a "Crazy for the Classics" series of classes about Greek and Roman history, mythology, language, and culture at her local library in San Antonio, Texas. The classes, designed for students eight to twelve years old, will place an emphasis on the relationship between the Greek and Roman civilizations and on the Greeks' influence on the Romans.

David Tapper will introduce a workshop at the National Hellenic Museum in Chicago, Illinois, focusing on ancient pottery as a principal means of understanding daily life and special events in the ancient world. In his 90 minute program, students aged nine to fourteen will learn about the role and significance of pottery decoration in ancient Greco-Roman civilization, and about Greek vocabulary for specific types of vessels.

Sophie Pelzer will teach elementary school students at the local library or at a homeless shelter in Yarrow Point, Washington, about Greco-Roman mythology. In her course, she will first provide students with a general overview of the Greek gods and goddesses, with an emphasis on the Olympians, and then focus on the stories of Hercules and Odysseus.

Alex Annenberg is teaching a series of four lessons on the Latin language and Roman culture to middle school-aged homeschooled students in Alford, Massachusetts. In the two lessons dedicated to Latin, students will learn noun/verb agreement, case endings and their basic uses, and verb conjugation, and in the two lessons on Roman culture, students will learn about topics including Roman entertainment, social structure, and politicians, and about the similarities between Roman and contemporary culture.

2018 Recipient
Calvin Lucido is running an after-school exploration of mythology and culture for 2nd-4th graders at Flint Hill's lower school. Students will learn about Greco-Roman mythology and Roman culture through storytelling, discussions, and hands-on activities.

2017 Recipient
Shaan Bhandarkar founded Mission TechConnect and its Classics-dedicated workshop program AuxFer. Through this initiative, Shaan wishes to share his enthusiasm for Latin with the next generation of Classics admirers by coordinating multiple interactive workshops delving into Roman culture and introductory Latin grammar.

2012 Recipients
The Latin IV class at Milton High School (Milton, MA) staged seven plays in Latin and English based on Phaedrus' Fabulae for the fifth grade class at a local elementary school.

Alexia Hernandez (Deerfield Academy, Weybridge, VT) designed Academia Latina, a two-week summer program for students in grades 1-6 to explore Classical mythology and basics of the Latin Language. The program features arts and crafts, as well as modern comparisons for mythological stories. "I came. I saw. I learned."

2011 Recipient
Ann Evans and fellow students at St. Mary's Academy (Raleigh, NC), under the direction of Ms. Elizabeth Olson, conducted a six-week after-school program with fourth and fifth grade students at a local elementary school. Together, they explored the Latin Language, as well as mythology, culture, art, and architecture through activities, crafts, and projects.

2010 Recipients
The 8th grade Latin class at St. John's Episcopal in Laurel, Maryland. Students created a set of activities and artifacts to help teach preK-5th grade classes about the Roman culture and mythology. The activities will be passed down from one Latin class to the next, so young students at St. John's will be able to learn about the Classics for several years.

Jacob Glick is a student of Dr. Pontone in Great Neck, NY. Jacob continued his Latin program's successful eight-week after-school Latin program at an elementary school in his hometown.

Katherine Williams is a student of Mrs. Arble at Princess Anne High School in Virginia Beach. Katherine developed and taught a six-week program for elementary school students in a gifted and talented program in the Hampton Roads area. They explored the Latin language, Roman culture, and classical mythology. Katherine served on the faculty of LatinSummer Williamsburg in 2009.

2009 Recipients
Brandon Shih is a student of Dr. Pontone in Great Neck, NY. Brandon plans to use his scholarship to continue an eight-week after-school Latin program at an elementary school in his hometown.

Latin IV and V classes at Moultonborough Academy, NH. They staged an ancient Roman comedy, Curculio, to entertain and educate children in grades five and six. The scholarship was used for publicity, costumes, scenery, and props. With this program, the students helped children to recognize the impact that the Romans have had on our modern world.

2008 Recipients
Chris Leung is a student of Dr. Pontone in New York. He continued the foundation that the previous year's recepient had established. Chris used the scholarship to obtain the necessary materials to continue running an after school enrichment program at a local elementary school in his hometown.

Brian Miranda is also a student of Dr. Pontone at Great Neck South High School in New York. Brian used the scholarship to continue an after school Latin program at his local elementary school. He introduced fifth grade students to Latin and Classical Mythology. By the end of his eight-week program, many of the students were planning to pursue Latin in middle school.

2007 Recipient
Stephen Miranda, a top performing student from Long Island, developed an eight week curriculum Lingua Latina Magna Est for 5th graders at three local elementary schools. Stephen's aim was to increase interest in the Latin programs available at the middle and high school levels in his hometown. His efforts were so well received that these schools decided to instate his curriculum in an annually recurring enrichment program. He has studied both Latin and Greek from Dr. Anthony Pontone.

2006 Recipient
Rachel Ziegler, a student of Ms. Judy Grebe in Indiana, was the first in the history of Ascanius to have received the Classical Promise Scholarship. Rachel used the scholarship to help obtain the neccessary materials for her to introduce middle school students to Greco-Roman literature, history and mythology as she assisted in a 7th grade English class during the 2006 scholastic year. 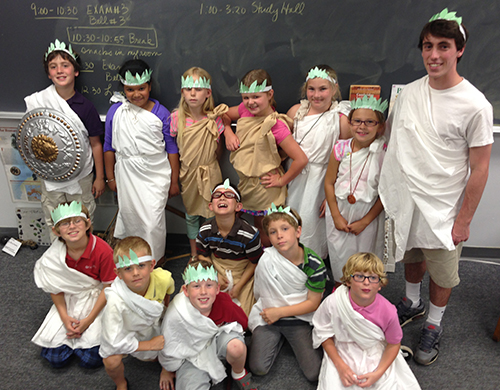 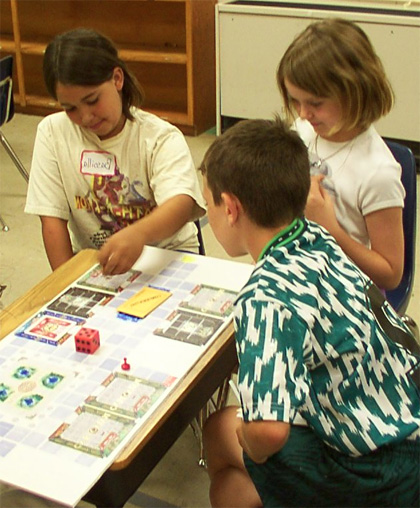 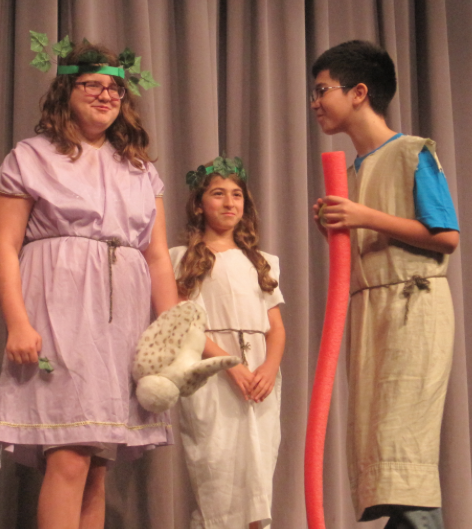 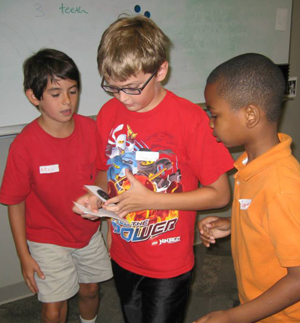